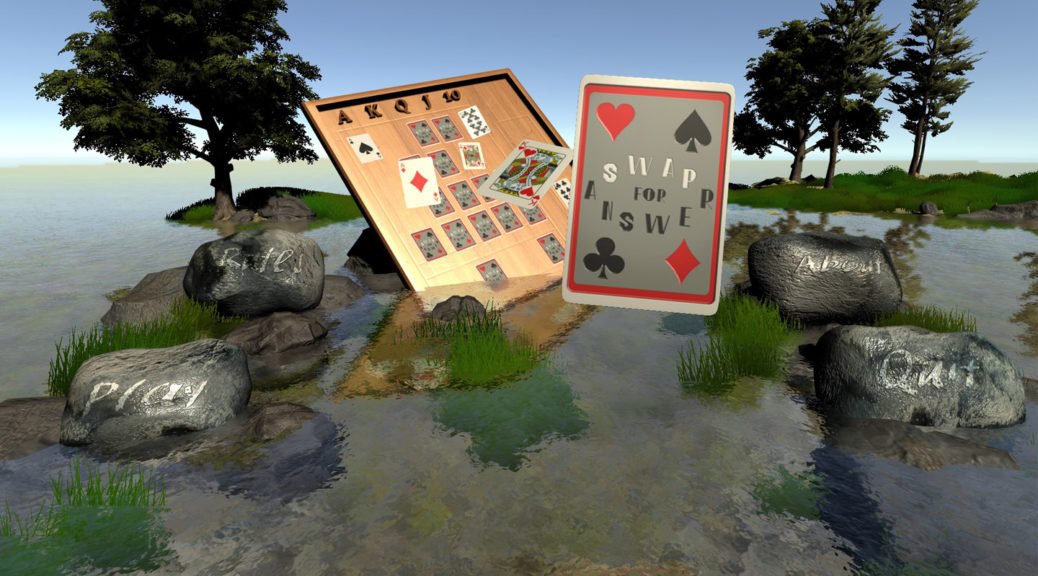 Today I present you a small game called Swap For Answer! I mentioned in my last post that a while back me and my husband were doing a small project, a game in Unity and am proud to say that we finished it! It is not perfect, but it is working! So let me tell you more about the game itself and how we ended up doing it.

So the game itself is not something we invented. It is just one of those games that I played with cards when I was a kid. I really don’t know the origin of it, but I think it is like a folklore thing that goes from generation to generation.  I might be wrong of course, but in any case we decided to transfer the folklore into digital. We didn’t even called it a game back then (in childhood days) but more like a wizardry thing, where you would ask a question, deal the cards and see if the answer would be Yes or No. Pretty simple and not complicated and we would spent hours as young girls keep asking various questions about our crushes (obviously) and swapping cards non stop 🙂 (ahh simple times)… That is why we decided to call it Swap For Answer. Simple, accurate a bit cheesy, but it just fits 🙂 As you can see the design of game is very simple, very minimal. We didn’t want to overburden ourselves with complex scene. Just because it is our first Unity “baby” we decided to go easy and try not to overdo things. Too many objects in scene can lead to lag and poor optimization and no one wants to see that. And in general it just would not make sense to go and try do some triple A sh*t, when you have 0 experience and waste your time chasing wind. So we used our limited resources and made the best what we could.

You may ask: “Why is the board floating in the water?” Why not! 😀 This game has a relaxing aspect to it (maybe it’s just me) so including some sort of water source in the scene looked like a good idea. So we put the game board on the lake shore atop some rocks, added suitable sound effects and we were done and happy with our scene design. We could have done something more appealing with the interface, but for the time being it would do just fine. There were just few objects I had to design in 3dsMax for this game, which were game board, some rocks and a cards themselves. Other assets like the trees and some additional rocks were downloaded for the Unity Asset Store. How to play it?

See the picture below with the rules, maybe it will make more sense or just watch  Youtube video with a bit of game play! Where can you play Swap For Answer?

Since this is a super simple and not very impressive looking game/app we decided not to bother to upload it somewhere for the big masses, we aren’t any company that is trying to sell brand or anything. It’s just a fun personal project/experiment that we wanted to do. So that being said I uploaded Swap For Answer to my Dropbox account and you can download it directly anytime. The file is 140 MB size so it won’t take long to get it. Once you download the file, unzip it and just run cards.exe file. Important note: Game is just for Windows users only.

If you do try the game, please, come back here and say how was it. Any feedback is welcome!

As always thanks for reading my little blog and go swap some cards for Gods sake! ;D

One thought on “We made a game in UNITY! Swap for Answer!”