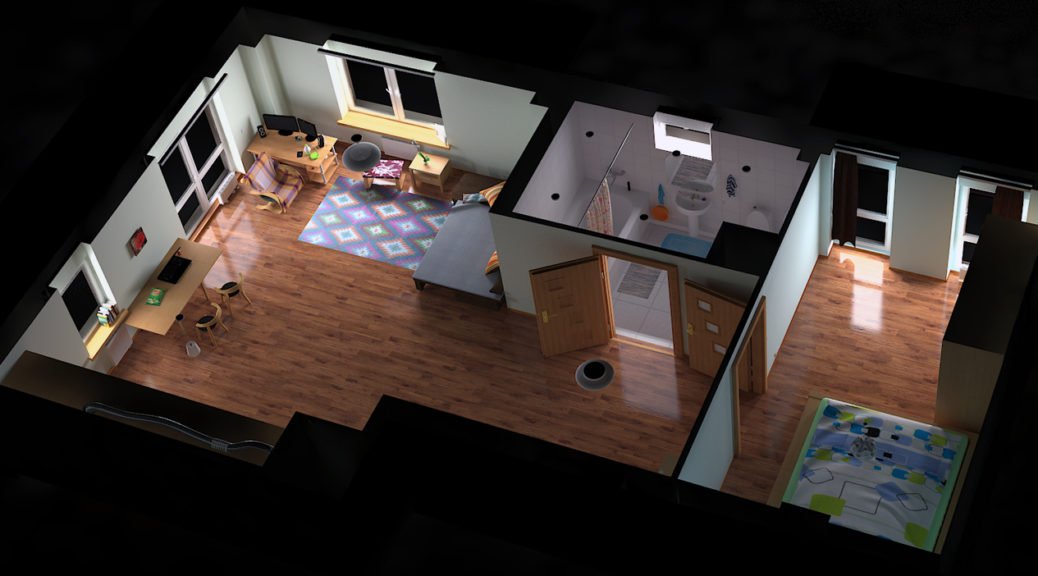 As I was finishing with this grand project (previous post) I kept thinking of what should I do next. After I tried exterior/interior scene modeling I was quite sure I wanted to explore this side of 3D a bit more. So I’ve decided to build the whole apartment that I am currently living in, because, why not? 😀  It is always easiest to build something that is literally around you. And you don’t need to search for reference images, cause the objects you’re modeling are right next to you. And after building this enormous multiple block house the apartment looked like a joke (which wasn’t). Oh I love that I got a bit cocky about it, but I soon realized that I wasn’t that good or fast.

I had no blueprints for this apartment, so I just did my measurements by eye. OK not just by eye… I measured the walls (and some other objects) with simple ruler (much professional) 😀 It worked out fine, I might say. It was just my personal project so no extreme precision was needed. As I started to build random objects I realized how much time it took me to actually model something.

Cause of course I wanted to build the exact replicas of my apartment and some of them are very detailed and I just HAD to model them exactly  as they are. I think I spend most of the time modeling the bathroom/bedroom door and lavatory. All the curtains and blankets were a challenge also. Of course I’ve learned about the amazing Cloth modifier, which was like magic to me (to be honest most of the things in 3ds Max looks like magic to me..) but it was just amazing to me how simple it was to use it, but it took time, till I got what I wanted. For the whole Cloth thing I watched, again, a tutorial by Yuval Dorfman (I will leave a link below to the actual tutorial). So object after object I was building up pace and in a month I had my lovely apartment scene. You can see all the renders in Gallery, but can see some of my favorites here.

Me and My husband had an idea to really transport this whole mesh to Unity and to make the possibility to walk around the apartment. It seems we are way too noob for this. 😀 I have made some crucial mistakes regarding modeling the scenes for Unity which I couldn’t undo, sadly, but I think in the future we will come back to this and make it happen eventually. For now enjoy my virtual apartment in 2D 😉

P.S. the view behind the windows is the real view we see.

The Cloth modifier tutorial in 3ds Max by Yuval Dorfman: